by Jennifer Hillman-Magnuson - in Parenting 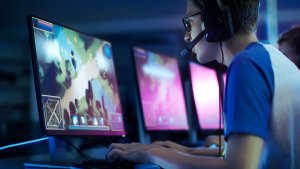 What do our children look forward to most when it comes to summer vacation? For most kids, it’s the extra downtime. Summer camps and activities can be wonderful, but free time to play is not only fun, it’s incredibly important for your child’s emotional development. So much so, some experts say that for every week of structured activities your child has during the summer, you should incorporate three weeks of unstructured time.

I subscribe to this theory, but like any parent I still worry about how my children choose to spend their downtime. Especially since my boys love to play video games. Ever since I discovered the World Health Organization has declared video game addiction a mental disorder, I have tried to straddle the line between letting them have the fun they want in their free time and setting limits. This is a challenge for me, not having grown up with technology, so it all seems excessive when viewed through the lens of someone who once thought Pong was the ultimate in video game tech (sidenote: try and explain how awesome Pong or Space Invaders was to your children. Show them the killer graphics. Watch their little heads explode over the fact you believed a moving rectangle was even close to a tennis racket).

This is where my sons’ obsession with Overwatch comes into play. They love this game. I’ve never seen them so focused on an activity in my life. If left unchecked, they would literally be glued in front of their X-Box all day. I know this because I’ve had the rare occasion where my own to-do list has consumed me and I found my boys, glassy-eyed, in the same position I left them in the morning when calling them for dinner.

Recently, I was talking with some other moms at the pool as our children swam and the topic of video games came up. One mom, the unicorn in the bunch with a child who isn’t obsessed with Overwatch, mentioned she read an article about a child who had to check into rehab for her Overwatch addiction. She casually sipped her iced tea while telling us this girl was so addicted she would soil her pants rather than take a bathroom break while playing. Like any concerned parent, I panicked. Thankfully, I couldn’t find this article, although it didn’t stop me from interrogating my own kids on their bathroom habits while they played video games. I knew I had to set some firm limits with their screen time, stat.

First, I overcame my own fear of technology and taught myself how to navigate our internet settings online. Admittedly, I am a bit of a Luddite, so hopefully this isn’t as hard for most. Now, every morning, I change the WiFi password.

Second, I busted out my beloved laminating machine and got to work. I typed up several flyers and happily fed them into my laminator. It’s the small things in life, and laminated paper tops my list of things that make me happy. I posted a sign on their bathroom door with instructions on how to retrieve the daily WiFi password.

Surprisingly, I didn’t receive much resistance, although that may have to do with the fact they are also receiving an allowance this summer.

Third, I declared a daily two-hour amnesty on video games. They can glue their eyes to the screen to their hearts’ content for 120 minutes. Then I unplug.

How about you, PlanHero Nation? How are you regulating screen time this summer? Whether it’s video games, iPads, or television – share your ideas here so we can all avoid rehab.

Jennifer is the editor and founding member of PlanHero. She's a recovering helicopter parent, mom of five, and grew up in the Pacific Northwest, where she once again lives after fifteen years of moving around the world with her husband and kids. When she's not writing for PlanHero she's working on her second book and dreaming about someday having white furniture. Her first book, Peanut Butter & Naan: Stories of an American Mom in the Far East was published in 2013. She also takes on a small number of clients for creative and editorial consulting work.